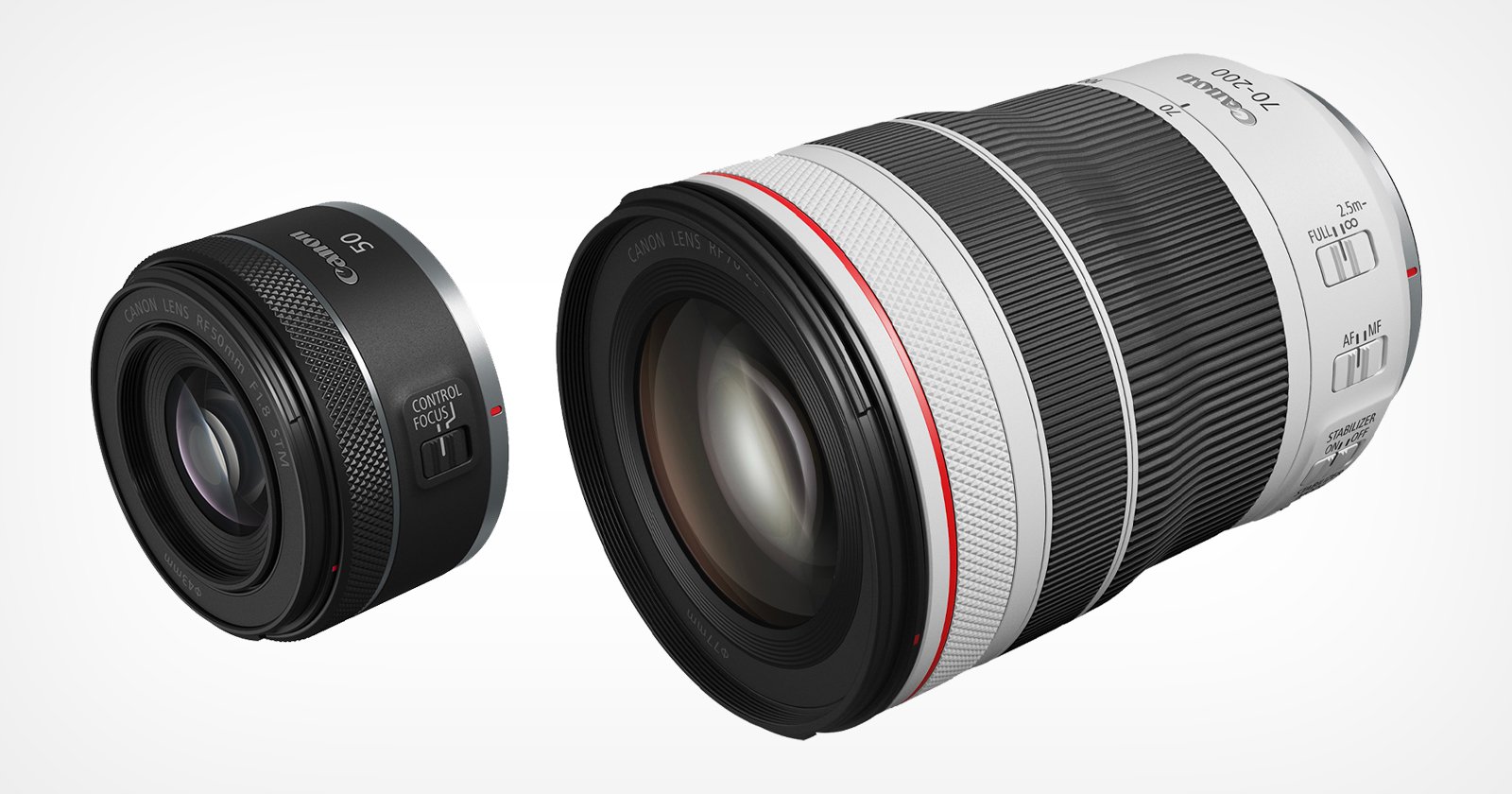 Canon has announced the 70-200mm f/4 L IS USM and the 50mm f/1.8 STM lenses for the RF mount, making for a now rather robust 19 native lens options for Canon’s full-frame mirrorless system.

Canon says that both lenses are completely redesigned from their EF predecessors with new lens formulas and enhanced elements. That said, the company also made sure to mention that neither lens strays too far from the “bloodlines” that made them popular to begin with. Canon’s new 70-200mm f/4 lens is 11% lighter and 32% shorter than the EF version with the internal lens elements rearranged in such a way that a majority of the elements are closer to the camera body which should help make the lens easier to balance. The compact and lightweight nature of the lens makes it Canon’s shortest and lightest 70-200mm f/4 zoom lens ever. It is so compact that Canon was unable to, or didn’t need to, include a tripod collar. The zoom lens has a minimum focusing distance of 1.97 feet and a maximum magnification of 0.28x.

The lens features 16 elements in 11 groups, including four UD lenses which are employed to help reduce chromatic aberration. The Optical stabilizer has three settings and up to five stops of shake correction on its own, and up to 7.5 stops of vibration reduction when combined with the in-body stabilization of the R5 or R6 cameras. The 70-200mm also includes a customizable control ring that will allow you to adjust exposure compensation, shutter speed, aperture, or ISO depending on how it is programmed. As is expected with Canon’s L-series, it is also dust and weather-resistant and features a fluorine coating as well as what Canon calls an “Air Sphere Coating” that it says minimizes lens flare and ghosting. Canon’s affordable “nifty fifty” has made its way to the RF mount and isn’t just a straight port of the EF version, but has been retooled slightly to work specifically for Canon’s mirrorless cameras. The first visually noticeable change is the customizable control ring which, like described above on the 70-200mm lens and like on most RF lenses, allows you to adjust exposure compensation, shutter speed, aperture, or ISO. Additionally, there is a switch that allows you to adjust focus.

The inclusion of a PMo aspherical lens helps to reduce chromatic aberration while also achieving what Canon touts as edge-to-edge sharpness. Additionally, the combination of the lens shape and Super Spectra Coating (SSC) helps to minimize ghosting and flaring.

The 50mm f/1.8 STM is made up of six lens elements in five groups, has a minimum focusing distance of 0.98 feet, and a maximum magnification of 0.25x.

As mentioned, this lens is designed to be affordable and approachable, and it’s $199.99 price tag reflects that. It will be available around the same time as the 70-200mm f/4: early to mid-December.

For more information on both lenses, visit Canon.com.