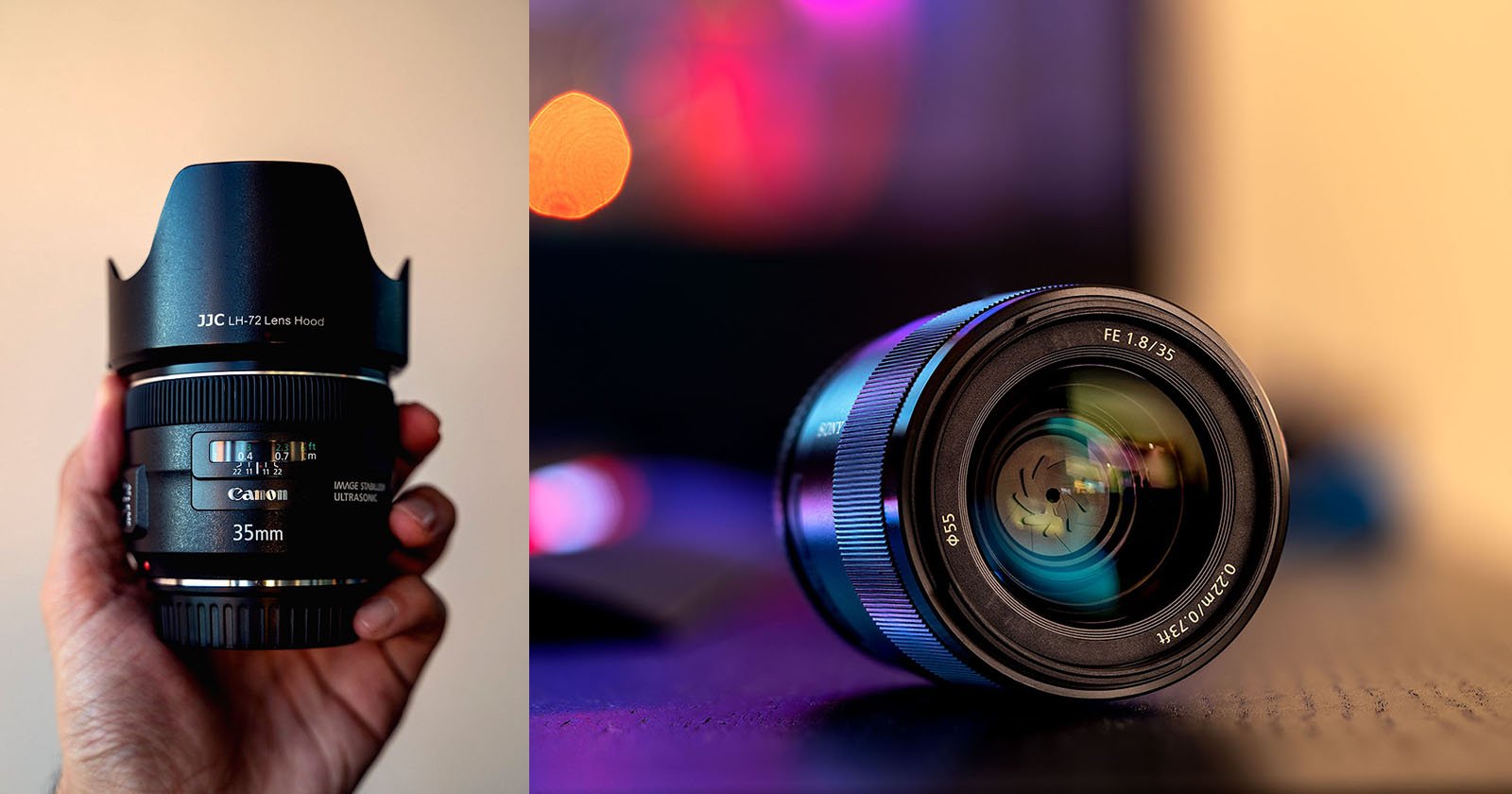 After a little over a year of owning the Sony FE 35mm f/1.8, I think it’s time to write a review. This will be no way a technical review but based more on actual usability and real-world use.

With 35mm being my favorite focal length, I’ve owned quite a few different lenses over the years. I think my current favorite 35mm lens to date would be the Canon EF 35mm f/2 IS. This was the lens that made me love this focal length so I think it holds a special place in my photography heart.

Even after switching to Sony, I kept this lens for some time. It worked well AF and IQ wise on the Sony, the only downside was the extra length due to the adapter. I always planned to go native so I decided to sell the lens and wait for Sony to release something.

After selling this lens I was doing fine with the Tamron 28-75mm f/2.8 but I still had an empty hole in my heart. A few months passed and I gave into temptation and bought a new 35mm lens.

As mentioned I was originally meant to wait and save for Sony to release a new 35mm lens. Before switching to Sony, I planned to get the Sigma 35mm f/1.4 Art in the native E Mount once released. I even had this lens preordered but ended up canceling it due to how well the Canon worked with the MC-11.

With the Sony 35mm being nowhere in sight and the 35mm Art being on sale, I decided to give it a try. I had always wanted to go native and considering how good the 35 Art was known to be, I felt there wasn’t really anything to lose.

I kept this lens for roughly three months. During that time I have to say it created beautiful images and the only complaint I would have is the weight. This is a common complaint but in all fairness, it’s practically the same size and weight as the Sony FE 35mm f/1.4.

I actually thought I would keep this lens for at least a year as I knew I wouldn’t be able to get another 35mm f/1.4 for that price and that quality. Below is a candid street shot I took at Market City here in Sydney. Despite being a wide-angle lens, the fast f/1.4 aperture gave the image this depth that I really love.

I was doing well and enjoying the lens until Sony went ahead and announced the long-rumored FE 35mm f/1.8. As much as I wanted to resist it, I couldn’t help myself. I listed the 35mm Art for sale and found a buyer quick.

The New Lens on The Block

Funnily enough, I was the very first person to preorder this lens at my store of choice. Despite this, I ended up waiting an extra month after release for them to get the lens in. Eventually, I got the lens and was very happy with the size and weight.

Like most new gear, I used the lens quite a bit and while using it I was impressed with what I saw. It was nearing the end of 2019 and I always shoot less later in the year so the lens started to get less use. As it approached closer to the end of the year, I also got the Sony FE 16-35mm GM which started to get all my attention.

My perspective was that I had used the 35mm focal length so much that it wouldn’t hurt to try using other lenses more and then come back to it after some time which didn’t quite work out.

In all honesty, I’ve spent a long time not using this lens. It didn’t have so much to do with the quality of the lens but more about my interests. I had a goal of using my 85mm more last year so that lens got more use. I’ve also gone through many different lenses in that time, including the Tamron 28-75, Sony 16-35 GM, and Samyang AF 85mm.

The other thing I have to consider is not so much the quality of this lens, but the ones that preceded the Sony. My two prior 35mm lenses, the Canon EF 35mm f/2 IS and Sigma 35mm f/1.4 Art were two amazing lenses. I really enjoyed using both of them and they had unique characteristics.

Now many may disagree with this but despite the FE 35mm being a lens that does have excellent IQ, I feel it doesn’t have any real stand-out characteristic. It’s tack sharp wide open, focus is fast but still accurate, and it has nice round bokeh balls. Despite all this, the rendering just doesn’t have that unique characteristic to it.

Is this or should this be a deal-breaker? I would say no. For the majority of people, this wouldn’t even be an issue. This lens still has the capability to produce amazing images with fast and accurate autofocus. I would say it is a lot like the Sony FE 85mm f/1.8 in that regard. Just like that lens, it is a great technical lens that is hard to fault, it’s just the rendering that is missing that special something. There was a point that this somewhat bothered me but that recently changed.

It would be a lie to say this lens has got a lot of use this past year. In addition to the reasons I mentioned above, I’ve gone a long time without taking photos in general thanks to the lockdowns. With that easing up more now in Sydney I have found myself out shooting again. The desire to write this review also pushed me to use this lens more again and I’m glad I did.

After using it more I have a newfound appreciation for it. This lens may not be the cheapest lens of its type or have the most distinctive rendering of all 35mm lenses made, but it does offer amazing quality and does what it needs to with ease. The 35mm focal length is very versatile. It’s the type of focal length that is wide enough to capture images like landscapes or cityscapes but also long enough to do portraits with a decent background separation and not too much distortion.

As you can see I’ve used this lens for everything from portraits to cityscapes and still life. Regardless of what it’s used for, the only limiting factor is my creativity and not this lens. Although the body and it’s type does contribute to this, missing focus or having slightly front/back focused images should never be a concern with this lens.

This lens nails focus each and every time it’s used. Compared to say the Canon 35mm I loved and used on my old DSLR’s, I only have to worry about my composition as the exposure and autofocus are an afterthought. I also believe this lens can complement either a 24mm or 50mm lens without being too similar.

I also own the Sony FE 24mm f/1.4 GM lens which is amazing in its own right. Originally one of the reasons I sold my 35mm Art was I wanted something small and light as a carry-around lens. This certainly fits that description and is something you can carry in your backpack all day without having a sore back or shoulder the next day. Now if I had the 24 GM first, would I still need a 35mm lens and would it be the Sony?

In terms of if I would still want a 35mm lens that is an easy yes. I feel there is enough of a distinction between the focal lengths to warrant owning both. For me, the 24mm focal length is better for subjects like cityscapes, landscapes, and travel due to its slightly wider field of view. Whereas the 35mm does look better for tighter framed subjects like food and portraits.

Now would I choose this lens over the current native FE version of the 35mm Art? The answer would still be yes. The 35mm does have slightly nicer rendering with its f/1.4 aperture but for my current use, this isn’t enough to justify the added size and weight. To be fair most 35mm f/1.4s for the Sony FE mount are all around that 600g mark and the same weight. It’s always nice to have an f/1.4 lens but the benefits don’t always outweigh the cons in my case.

A Safe and Secure Future?

So by now, it would be fair to assume that with how much I love and enjoy using this lens I’d never sell it. One thing I’ve learned when it comes to me and gear is to never say never. This is certainly a lens I am happy to own and use but as time goes by, there will always be something better.

With the Sony Zeiss 35mm f/1.4 being known for its quality control issues it wouldn’t be surprising if we see a GM version of this lens in the coming year. There’s also the strong possibility of a Sigma doing a modern DN version of their 35 Art as it is quite old now.

Although the two possible lenses don’t exist now, they would likely be quite different from this one. The 35 GM would likely be significantly more expensive and the Art may be similar in price but still larger. If I ignore my G.A.S then I know I will stay perfectly happy with this lens and the quality images it produces.

I hope that when a new lens does release, I’ll read over this again and remind myself I’m better off saving my money. Below are various images I’ve taken with this lens showing all different genres and uses.

This brings my review of the Sony FE 35mm f/1.8 to a conclusion. To close, I’d say if you shoot Sony and are looking for a 35mm option, the Sony is an amazing option that is well worth the money. Real-world reviews like this may seem boring to some but the fact is most lenses (this one included) will not be the limiting factor, only one’s skill and creativity will be.

If you were to choose this or any other 35mm lenses for the Sony Alpha system you could great results. The main deciding factor is what suits your shooting style and needs the most.

About the author: Daniel Lee is a photography enthusiast based in Sydney, Australia. He enjoys many different genres but generally focuses on street, urban and still life photography. You can find more of his work and writing on his website, Twitter, and Flickr. This article was also published here.